Ali and Kenny Carruthers of Johnstonebridge host a highly successful charity night and raise over £4,500 for DG Sands

Ali and Kenny Carruthers of Johnstonebridge host a highly successful charity night and raise over £4,500 for DG Sands 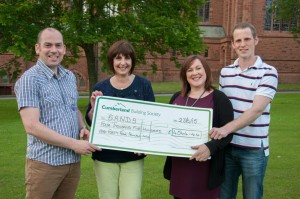 Dumfries and Galloway Sands were received a cheque for £4544.44 from Ali and Kenny Carruthers from Johnstonebridge following a charity night which was held in memory of their baby daughter, Bethany who died in December 2013.

The charity night was held at Lockerbie Lorry Park on the 16th of May 2015 and the couple sold over 200 tickets for the event. Entertainment on the night included a silent auction and a huge raffle as well as music which from the wonderful band ‘Not Guilty’. A huge thanks to everyone who supported us on this night.