Sponsored slim in aid of Dumfries and Galloway Sands 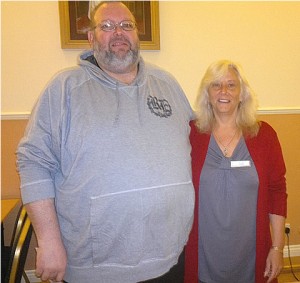 Local businessman, Bill Johnstone hopes to lose a massive 9 stone in a year and has very kindly decided to donate money raised to Dumfries and Galloway Sands.

Bill had his first weigh in on 14th January and his start weight was 27 stone and 7lbs.  With the support of Weight Watchers, Bill has in only one month, managed to lose an amazing 17lbs!

We would like to wish Bill every success and if you would like to sponsor Bill this can be done by emailing him at [email protected] or giving him a ring on 07932155544.

Bill is pictured with Christine from Weight Watchers at his first weigh-in.