Debbie and Gordon Macdonald recently donated the amazing sum of £5500 and we are extremely grateful to them.  Gordon’s friends from the Normandy, Troqueer, had suggested holding a darts, dominoes and pool day in order to raise money in memory of their precious daughter Freya who was stillborn in October. 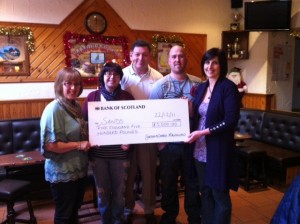 The event was well attended and the winners of the darts, dominoes and pool were presented with trophies kindly sponsored by Keith Faulds Motor Engineers, Stuart Wilson Plumbing and Heating and the Macdonald family.  There was a huge raffle which boasted many prizes thanks to kind donations and a phenomenal number of tickets sold.  More cash was also raised through a silent auction and sponsored wax.  Everyone who attended was extremely generous in their donations.  Thanks to Bill Irmie of the Normandy for his support in providing the venue.

Debbie and Gordon hope to make it an annual event and the trophies would be issued each year.

The money raised is a huge boost to our funds and we are looking into spending some of the money on cold mats in order for parents to spend more time with their babies and maybe giving them the opportunity to take their babies home for a time.

Thank you to Debbie and Gordon and to all who supported them on the day as well as those who helped in organising the event.

Debbie and Gordon said ‘We would like to thank everyone who pulled together and made this such a success during such a sad time in our lives.’