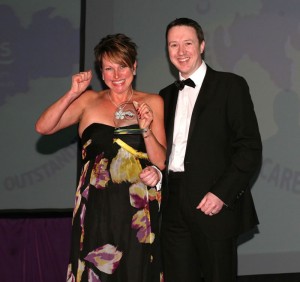 At a recent glittering awards ceremony our very own Alison Hall picked up the Volunteer of the Year Award.  NHS Dumfries and Galloway held the Celebrating Excellence Awards at the Easterbrook Hall on 27th May to recognise dedication, enthusiasm and commitment within the NHS.  There were 11 categories and many people were nominated for making a positive difference.

Alison is the Chairperson of Dumfries and Galloway Sands and works closely with Cresswell to support parents whose baby has died.

Dumfries and Galloway Sands was established in 2007 after Alison pinpointed a need for a support group within this region.  Alison worked tirelessly to get the group up and running through National Sands and has undertaken their befriender and advanced befriender training.  She communicates with other Sands groups throughout Scotland.  She has organised many fundraising events and was instrumental in securing our meeting room as a private place to hold our monthly meetings.

Alison is also involved in a Scottish Stillbirth Sub Group which consists of representatives from Scottish Government, NHS departments, researchers and SANDS.  The group aims to identify priority areas for action. 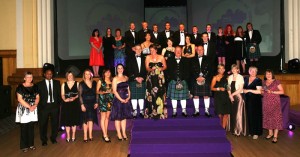 She continues her efforts to take Dumfries and Galloway Sands from strength to strength.  She is passionate about Sands and strongly believes that bereaved parents deserve the best possible care.

We are all so proud of Alison.  If it wasn’t for all her hard work, ideas and effort, Dumfries and Galloway Sands simply wouldn’t exist.