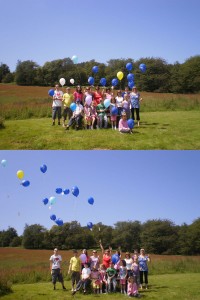 June was SANDS awareness month so around Britain families were taking part in activities to raise the profile of this worthwhile charity.  Families from Dumfries and Galloway SANDS visited Mabie Forest on Sunday 3rd July to release balloons to commemorate their babies.  Each family arrived with barbecue equipment, food and games.  Leaving the Dads to man the barbecues, the group took a walk round some of Mabie Forest, finishing in the clearing.

Everyone present had the opportunity to write a message to their very much loved and remembered baby and attach it to their chosen balloon.  Balloons were also released for babies whose families were unable to attend.  The balloons were released together and everyone watched the balloons float gradually to the clouds.  The group then returned to the barbecue site where lunch was enjoyed followed by a friendly, yet competitive game of rounders in the summer sun.